Because we sometimes cover sport in these here parts (or I do) and because the World Cup matters everywhere on the planet. And what a beautiful trophy it is. The noblest around in my opinion. 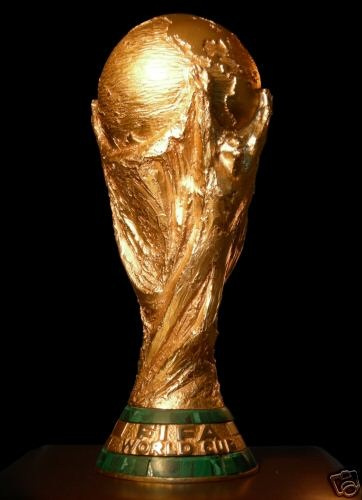 In about two hours time as I write, hosts Brazil play Croatia in Sao Paolo in the first match, and the question on everyone’s lips is: can anyone stop England from winning it? No need to answer that one, dear reader (really, no need whatsoever). Only time will tell which country wins, but I’ll give my prediction down below, after a little jaunt down memory lane, which is never the wrong thing to do.

It might surprise some who only notice football every four years that the best football isn’t played at the World Cup. The big European clubs have the best players, so the Chmapions League is the best, but the World Cup is the real global event. I remember Argentina 1978 (when I was eight year old) and the astonishing ticker tape welcome the Argie team received wherever it played. My first real memory though, and the match which springs to mind whenever anyone mentions the World Cup, took place during Spain 1982 and was a real landmark match. I bet some of you can picture it already.

It was the game between Italy and Brazil. Brazil were the hot favourites to win the Cup, and what a magic team they were. Zico up front, the lanky, chain smoking Socrates pulling the strings in midfield alongside Eder and Falcao with Junior always bursting forward. What a team that was. They only had to draw with Italy to reach the semi-finals, and the stage was set in Barcelona.

Italy generally, and their striker Paolo Rossi in particular, had other ideas. They weren’t bad either. Cabrini, Gentile, Antognoni, Altobelli, Gaetano Scirea, they all were on the field that they and they could all play too. And if they felt like it, they’d kick you to pieces also, particularly Claudio Gentile who was anything but.

Now I was school the day Italy played Brazil. I used to get a bus there and back home, and as usual that day, I left school and walked to the bus stop just by Rumbelows. That was a shop which sold TVs, kiddies. And while I was waiting for the bus, I looked in the window as the teams came onto the field. The sun was blazing down in Barcelona that day, and it seemed to burst out of the TV in the window. A bus came and went without me. The anthems played, the game started, and more buses came and went without me because I was transfixed by Italy versus Brazil, my nose pressed up against the window.

Football fans know what happened that day. Italy’s manager, the wily old Enzo Bearzot, knew that Brazil were so good they were sloppy in defence, almost as if they didn’t have to defend properly because they would outscore the opposition. He knew that Italy had a real chance if they could stay within a goal of Brazil, because Italy would have chances too. And chances they had, as Paolo Rossi scored a hat-trick, Brazil – the greatest team in the world – shot themselves in the foot to lose 3-2, and one of the most memorable football matches ever played was an upset. And I remember it well because I stood outside Rumbelows for two hours and watched every kick –

Italy went on to win the World Cup, beating Germany in the final, a moment all fans of a certain age (ehem) will remember for Marco Tardelli’s winner and his goal celebration, which will always be the last word on deep passion and simply not knowing what on earth you’re doing. We’re sometimes rightly cynical about top level sport, but what a magic moment. Just look at him!

So it’s prediction time. Well anyone who gets past England might win it (obviously). Brazil are the hosts, Spain the reigning World Champions, and Argentina have so many good forwards they could leave Carlos Tevez at home. In fact if the Argies win it it’ll be like the last chopper out of Saigon for them after the final.

To be honest I have no idea who’ll win. There’s not a clear favourite in my mind. Ok, Argentina then, to beat Brazil in the final, simply because I have a mischievous sense of humour.