So the heroic Russian humanitarian convoy, ludicrously described as an invasion by the Kiev propagandists, has returned back to Russia after delivering tons of aid to the Donbass people. That’s 260 trucks of food, water, sleeping bags and generators. A hundred of the trucks got to Lugansk, which has been without power and water for weeks and where food was running out while the Kiev forces have pounded it by air, artillery, grad batteries and ballistic missiles.

NATO chief warlord Anders Fogh Rasmussen condemns the convoy. So while NATO allies with Kiev, the West stays silent on the relentless bombing of civilians, which Kiev describes as an “Anti-Terrorist Operation”. This is a recent result of that operation in Lugansk – 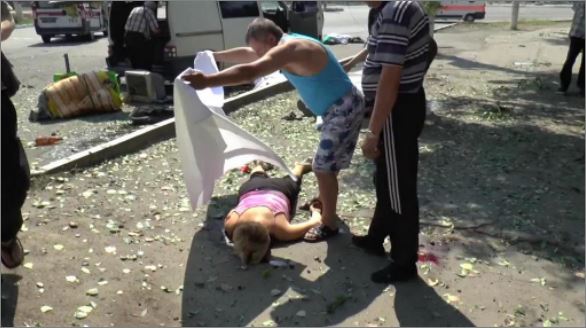 It’s still strange that hundreds of thousands of Europeans can be relentlessly pounded by a modern military without the MSM noticing. It’ll send reporters to the furthest reaches of the Third World to get a story, but in Donbass there’s only the magnificent Graham Phillips, and he’s a one man band.