Turner’s “Rome, from Mount Aventine” will go to auction with an estimated value of £20million. What a magnificent painting (and as someone who’s walked every inch of every road in Rome, the Aventine’s changed a bit). Click the pic for a bigger image – 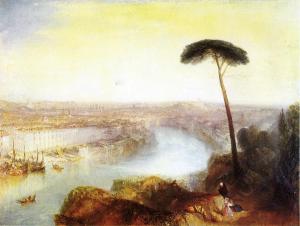 So is it worth £20million? As the Austrians teach, value is subjective. There is no empirical rod or scale of value. The value of a good is not determined by any inherent property of the good, nor by the amount of labour required to produce the good; instead value is determined only by the importance an individual places on a good for the achievement of their desired ends.

So yes, if someone wants to exchange £20million for it, it is worth £20million to that person, and that’s the end of it. And we’ll see where some of these newly printed notes are going …

At least we’re talking a real painting here, and something undeniably beautiful instead of a splurge of paint or tangle of wires, or whatever’s in the Tate Modern. I just hope it goes to a real connoisseur and someone who’ll appreciate it, and not some gauche trophy-hunter from Russia, the Middle East or China. Ugh.