There have been alot of reports of Yes campaigners (thems the ones who want out of the UK) in Scotland being abusive and violent towards No campaigners. The Telegraph reports what are just the latest of many such stories, with prominent businessmen who signed a publicly published letter receiving death threats, No posters being vandalised and a partially sighted pensioner being punched in the face by a Yes supporter.

That’s the reception they save for English visitors. 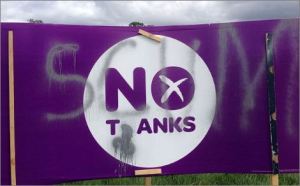 Now I’m down in the great and ancient Kingdom of Wessex, not up there, and I know the press (which overwhelmingly supports the No campaign) can paint a false picture, but these reports have been coming in for a long time and I’ve heard (obviously sane) callers to BBC 5Live recount their brushes with threats and intimidation.

Whatever the outcome of the vote tomorrow, the relationship with Scotland will change, and it will be partly coloured by what seems to have become a bitter campaign in some areas. The many reports will have been noted across the UK, and alot of people won’t be minded to be too helpful if the Jocks need bailing out one day, or call for the Barnett Formula to be renewed.

19 thoughts on “IT’S GETTING PHYSICAL IN JOCKLAND”