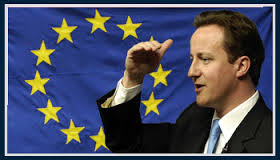 When Conservatives stop acting as Conservatives, then someone else will eventually come along and take their place.

And so it is with the British Conservative Party, led by Etonian liberal David Cameron. To my mind, he is the Emperor with no clothes, and UKIP have exposed his nakedness previously in Clacton and they will do so again next month when they take the Rochester and Strood Parliamentary seat from the Conservative Party, possibly triggering the destruct button for Cameron.

Just the other day, the European Commission handed the UK an “unexpected” bill for £1.7 BILLION to be paid on December 1st. This loot has to be handed over to the robber barons in Brussels because our economy has been doing too well, and so we must be punished. Knowing that this is political DYNAMITE, and a huge hostage to UKIP good fortune, Cameron has huffed and puffed and said he will NOT hand over the cash —- by that date. He blustered that he serves the will of the British people, not the EU bureaucracy.

If he serves the will of the British people and finds this £1.7 BN soooooo unacceptable, why does he lavish £11 BILLION on a bulging foreign aid budget that most British people would rather was shrunk, not increased?

Cameron postures as a Conservative but has governed as a Liberal. And even now, he is not being honest with the electorate which is why – next month – the voters of Rochester & Strood will deliver their damning verdict on his leadership. At that time, the people WILL have spoken and he will stand exposed for ALL to see.

10 thoughts on “CONSERVATIVE SELF DESTRUCTION”