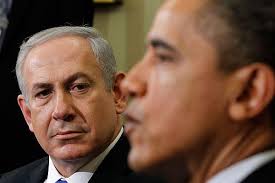 It’s blindingly obvious that Obama has been no friend of Israel for years now but this seems to be crystallising into a genuine crisis in recent days;

There is a crisis with the Americans and it needs to be addressed as a crisis,” Finance Minister Yair Lapid said Saturday after ongoing tensions between Washington and Jerusalem led US officials to block Defense Minister Moshe Ya’alon from meeting with senior administration officials during his current US visit! We mustn’t pretend there isn’t a crisis,” Lapid told a crowd in Tel Aviv Saturday. “Our relations with the US are vital and everything that can be done must be done to end this crisis.”

Indeed. The bond between the PEOPLE of the United States and the PEOPLE of Israel is strong but the problem resides in the White House and those Jewish people who vote Democrat have contributed to this situation. It’s not that Obama hates Israel, I think he just doesn’t really care that much and has little emotion invested in Israel. His enthusiasm to cultivate better relations with the Arab world (which has failed miserably but hey, that’s just a pesky detail) seems to have taken precedence and so we have the unseemly situation arising where US officials actively BLOCK the Israeli Defense Minister from meeting administration officials.  I am sure Hamas would approve.

11 thoughts on “NO FRIEND OF ISRAEL…”