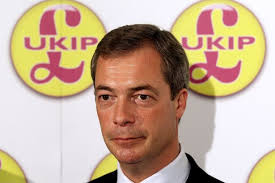 The UK Independence Party grow stronger by the day!

SUPPORT for Ukip has surged to a record high following Brussels’ attempt to hit Britain with a £1.7 billion “surcharge”, a new poll shows today.

It puts Ukip on 19 per cent, a jump of four points on last month and one point above its previous record support in June.

The Conservatives are up one point to 30 per cent to bring them level with Labour, which has slumped by five points to its lowest level under Ed Miliband.

The Liberal Democrats are down by one point to nine per cent, the Greens unchanged on four per cent and others unchanged on seven per cent. Today’s ComRes poll underlines Ukip’s growing appeal to voters turning their backs on both Tories and Labour.

UKIP’s potency is located in the fact it is now appealing to BOTH Labour and Conservative voters and this explains why despite only having ONE MP thus far in 2014 (there will be a second next month) Nigel Farage suggests that the Party could get up to 100 MP’s next year at the GE.

My hope is to see a Conservative/UKIP coalition next May, with Farage appointed Europe Minister. That should bring lots of lolz.

9 thoughts on “THE GROWTH CONTINUES….”