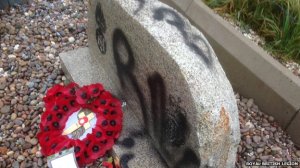 I think this is something that makes me more sad than angry.

A memorial to three Scottish soldiers who were murdered by the IRA has been attacked for a 19th time, the Royal British Legion has said. IRA Slogans were painted on the monument at White Brae, Ligoniel, on the outskirts of north Belfast and two wreaths were removed.

The monument is a tribute to teenage brothers John and Joseph McCaig, and their colleague Dougald McCaughey, 23. The off-duty fusiliers were shot dead at the site by the IRA in March 1971.

James Wright, chairman of Oldpark and Cavehill branch of the Royal British Legion, said: “Just like the cowards who in the dead of night murdered John, Joe and Dougald, these lowlife cowards cannot show their faces, they have to carry out their attacks under the cover of darkness. “As a branch we will not be deterred in ensuring that the murder of these young soldiers who were off-duty and out socialising in Belfast will never be forgotten.”

I fully understand what Mr Wright means, this is indeed the act of craven cowards, as was the brutal murder of these three young men in the 1st place. It’s a terrible thought that some other young men feel the need to deface this small memorial – but as I have pointed out over the years evil DOES stalk this world and it can get a hold in young impressionable minds and result in the likes of this desecration. I hope those doing this can find a little decency in their own lives and leave the memory of these three Fusiliers alone.

3 thoughts on “NO RESPECT, NO CHANGE…”