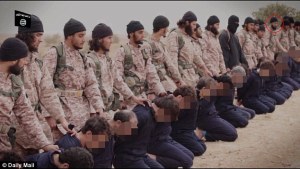 The above image says it all, really. It’s from the latest horror show brought to us by Islamic State and shows 16 Jihadi preparing to decapitate captured Syrian soldiers. It is suggested that two Frenchmen, a German and a British man are amongst the executioners.

Well, what is it that makes these men want to kill fellow human beings in SUCH a barbaric fashion? This sort of mass killing is something that humanity should have left behind CENTURIES ago. Why is it that ISLAM brings us this grotesquerie? And what do we do about it?

I believe Islamic State should be pulverised into the dirt of IRAQ and SYRIA. As you know, that is not happening and so whilst it seems IS is suffering setbacks in IRAQ, it maintains its Syrian fortress. Obama’s hopeless prevarication over Syria is central to the problem here and there seems little evidence this will change anytime soon. There is also the question of whether we should send in…gasp — ground troops. I can see a case for this – but only if the mission is the utter destruction of IS. It’s not about Nation building, it’s about IS demolition. However I think our political leaders have no desire to contemplate this and so IS can continue to prosper, propagate and kill.