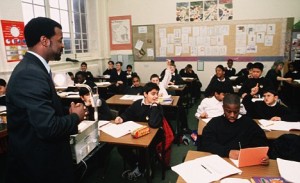 When you dismantle your national borders and millions of immigrants pour in, there are severe consequences. One of the first areas to experience these consequences are the parts of the public sector most exposed to this demographic change.

Iain Duncan Smith, the work and pensions secretary, has said that non-English-speaking children are changing the character of British schools, as Ukip looks likely to gain its second MP in the Rochester and Strood by-election. The senior Conservative said an academic report setting out the billions of pounds that EU migrants had added to the economy was “silly” because it only looks at immigration in terms of the financial benefits to the economy.

His comments represent the latest escalation in the negative rhetoric about immigration as the Tories try to stem the flow of supporters to Nigel Farage’s party, which wants radically lower migration and a withdrawal from the European Union. On BBC Radio 5 Live’s Pienaar’s Politics, Duncan Smith said: “I thought there was a silly report, recently, in the last couple of weeks, that said: ‘Oh look in tax terms they have contributed more.’ First of all you have to take them all the way through to when they get older and they actually start taking from the state. You don’t account for the fact that often in many communities they literally change the schooling because so many people arrive not speaking English. You have then got problems you know with local services, transport all that kind of stuff.”

Here’s an example of what he means…

There are now ten schools in England without a single pupil who speaks English as his or her first language. Research reveals that there are almost 600 primary schools where 70 per cent or more of youngsters normally speak a foreign language. Across the country, one in seven pupils aged 4-11 does not have English as the first language, which is the equivalent of 466,620 children.

The change is picked up first in Primary schools, and then in Secondary schools. It is felt in the likes of the NHS. It is manifest in the Housing sector. Slowly but surely the radical demographic change will alter the face of this country forever and irreversibly. In some ways it may be too late. UKIP recognise this and so does an increasingly alarmed section of the UK population.

4 thoughts on “CHANGE IN THE CLASSROOM…..”