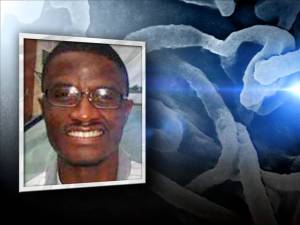 The Dr. Without Borders who just died in Nebraska of Ebola is a demonstration of why if we allow these people back into our countries they should be quarantined for the full 41 days recommended by the WHO.

Dr. Martin Salia’s Ebola test came back negative, his friends and colleagues threw their arms around him. They shook his hand. They patted him on the back. They removed their protective gear and cried.  But when his symptoms remained nearly a week later, Salia took another test, on Nov. 10. This one came back positive, sending the Sierra Leonean doctor with ties to Maryland on a desperate, belated quest for treatment and forcing the colleagues who had embraced him into quarantine.

The good Dr. is now dead.  He died today of Ebola.

This could just as easily have been the result of allowing that stupid Nurse to roam free that is suing because NJ and Maine had the gall to want her quarantined.   These Dr’s and Nurse’s that are doing wonderful work placing themselves in harms way treating this disease should be commended for their service.  They should then be placed in a space capsule for 41 days.

The majority of the people that have comeback with the disease are Dr.s and Nurses. They represent the kindest of heart and a danger to the General Public.