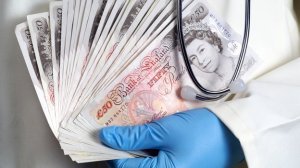 As readers know, I am an implacable opponent of socialised healthcare for the simple reason that it removes the fundamental need of self responsibility and places politicians in charge of YOUR health. That has to be wrong. However the NHS is THE political totem ok the UK political class and NHS worship is the new State religion.

George Osborne has confirmed he will put an extra £2bn into frontline health services across the UK next year. The chancellor told the BBC it was not a “one-off” but a “year after year” down-payment on a long-term NHS plan. There would be no “unfunded giveaways”, he said, adding the increase in NHS funding was possible because the economy was strong. Labour’s Ed Balls said it was “crisis money” and they would pledge an additional £2.5bn to the NHS.

You have to laugh. The Libdems have been running around promising an extra £1.5bn. Now the Conservatives are raising the stakes with an extra £2bn. And Labour seek to see that £2bn and raise a further £2.5bn. And it is all profoundly misguided.

Throwing MORE AND MORE of our cash into the chasm of the NHS won’t do a thing. It’s inherently dysfunctional. Over the past four years, the UK has seen ONE MILLION immigrants come here. They consumer all public services, NHS included and whilst we remain in the EU nothing can be done to change this. So more cash will be needed to prop up this vast dinosaur.