The head of the Paris march today – 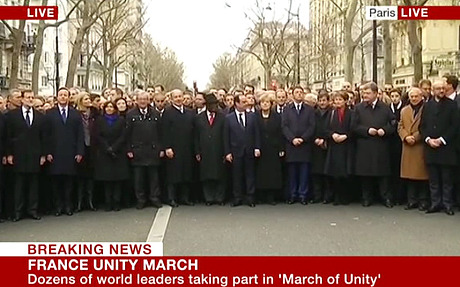 As well as Cameron, Holland and Merkel, each of whom are quite intolerant of free speech, the caravan includes prime ministers, presidents and ministers from NATO(!), the EU, Turkey, Egypt, Ukraine (Puppet Poroshenko, whose forces continue to murder oppress and civilians), the USA, Russia, Israel, Mali, Gabon, Niger, Benin, Algeria, Jordan, the Palestinian Authority, Qatar, the UAE and Bahrain.

Really, this lot are marching in defence of free speech and press freedoms. I’d march them off to The Hague. This bunch will tolerate murder, as long as it’s state-funded, and the suppression of free speech all day long.