THEY’RE all coming round to correct thinking on food and nutrition. ATW regulars will know that someone in these here parts has long and repeatedly explained that government low-fat, high-carb nutrition advice is not just wrong, but it will make you ill and even kill you. He has explained that cholesterol is good for you, despite the decades of wrong headed propaganda against it, and that the healthiest diet is a high-fat, low-carb one.

And more experts are now agreeing with him. A new report, published by the British Medical Journal no less, is blockbuster stuff –

As new research refutes the idea saturated fats are bad for you, what foods should you be adding to your shopping basket?

The article in BMJ’s Open Heart journal argues that the advice was based on flawed data and “very limited evidence”.

The warning, adopted by British authorities in the early 1980s, was based on research that focused only on unhealthy men, with the reports authors arguing: “it seems incomprehensible that dietary advice was introduced for 220 million Americans and 56 million UK citizens.

Incomprehensible?! We know why hundreds of millions were used as guinea pigs.

The source was the completely corrupt McGovern Report, in the US. It put millions of Americans and then Britons, on the path to obesity and disease in the 1970s while the U.S. government facilitated decades of political pandering and billions in farm subsidies to support the Industrial Food Complex and its deliberate junk science. This is a very short snap of its impact –

So what foods should you be adding to your shopping basket?

Experts claim that it is carbohydrates, sugars and processed foods that contribute to heart disease and recommend avoiding foods such as:

I’d caveat this generally good advice: yes, eat planty of good, healthy, tasty fatty butter, but make it organic butter. Same with the rest: eat good food, not cheap rubbish. I have pies and sausages from a great organic farm shop nearby which uses only good cuts of meat and no fillers.

As we’ve said before also, avoid fructose like the plague. It’s literal poison. No wonder obesity rates have been on the up. As over there, so over here – 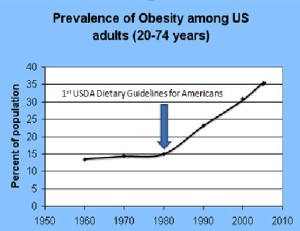 Much food is just carb and sugar-packed rubbish. It’s all volume and little nutrition. For decades now children and adults have literally starved for nutrition while gorging on high-carb, government-advised diets. In the long term, the disastrous effects of following this corrupt advice has been more than obesity; it’s caused millions to suffer diabetes, heart disease, blood pressure problems, behavioural problems and early deaths.

14 thoughts on “THE GOVERNMENT “NUTRITION EXPERIMENT” WHICH KILLED MILLIONS”