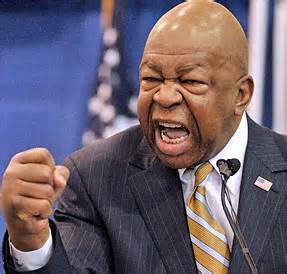 Rep. Elijah Cummings (D–Md.) is the epitome of everything that is wrong with the American political system.  Rep. Cummings has had no other Job in his life except that of a politician. He is a Lawyer by Schooling but has never worked in Private Practice.

In 96 he was elected to the Federal House of Representatives where he has served for 10 Terms. In that time he has become a Multimillionaire in Real Estate and other investments. He is the Ranking Democrat Member on the House oversight committee where he does everything he can to PREVENT any oversight. That however is a tale for another day.

Today I write about this scumbucket because of a quote I read this morning.

Rep. Cummings: People ‘Come to Government To Feed Their Souls’

Yes he said that people don’t go work for the government for the Money, they go into government work to feed their souls.  He however speaking to a Federal Workers UNION Luncheon, told them that since they are so underpaid he is going to fight to get them a raise through the “FAIR Act“. Because Federal UNION workers aren’t treated as fairly as the worker in the Private Sector.

A December 2014 Cato Institute report on federal and private sector worker pay finds, “In 2013 federal civilian workers had an average wage of $81,076, according to data from the U.S. Bureau of Economic Analysis. By comparison, the average wage of the nation’s 107 million private-sector workers was $55,424.”

When benefits like health care and pensions are included, “federal worker compensation averaged $115,524, or 74 percent more than the private-sector average of $66,357.”