TOMORROW (Tuesday), Crown and Parliament will attempt to deceive the British people. The deception will take place at the Palace of Westminster; the occasion will be the State Opening of Parliament. 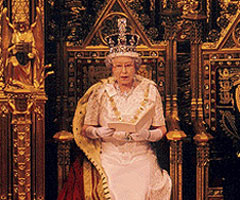 In the morning, the Queen will proceed from Buckingham Palace to Westminster escorted by the Household Cavalry. She will arrive at the Sovereign’s Entrance and enter the Robing Room, where she will put on the Imperial State Crown and parliamentary robe. A procession then leads through the Royal Gallery to the Chamber of the House of Lords, where the Queen takes the Throne. ‘Black Rod’ will then be sent to summon the Commons.

In a statement of the Commons’ independence, the door to their chamber will be closed to him and not opened until he has knocked on the door with his staff of office. The Members of the House of Commons will then follow Black Rod and the Commons Speaker to the Lords Chamber and stand behind the Bar of the House of Lords to hear the Queen’s Speech. Following the State Opening, a motion that the House sends a ‘Humble Address’ to the Queen thanking her for the Speech is introduced in both Houses.

Being a conservative, I know that the old ways are best and that the right time for change is only when it can be resisted no longer. The State Opening of Parliament consists of ceremonies and symbols which date back to the 16th Century, remind us of who we are and of the greatness of our nation. Yet it is a lie, a deception and all involved ought to be denounced.

Her Majesty alone may dissolve or recall Parliament. She is the Head of State and the Governor of the Nation. Her title – Queen – is recognition of the physical embodiment of the sovereignty of the British people. It allows for no compromise. Sovereignty, by definition, can only be absolute. It cannot be limited or partial. Like the concept ‘unique’, either a country is sovereign or it is not. A monarch is sovereign or he is not. It is for the protection of the Monarch’s sovereignty and state that the Laws of Treason were formed in the middle ages.

Yet we know that Her Majesty is no longer sovereign. She compromised her own rank and position when she enacted the European Communities Act 1972. Ever since then, foreign law has been supreme in the United Kingdom, foreign councils and courts our supreme governors.

As the sovereignty of the Queen remains with her until the moment of her death, any attempt to kill her or depose her by stripping her of the sovereignty is an act of treason. To remove the Queen would be to remove the protection the Crown provides to us so that we may remain a sovereign, independent nation, able to govern ourselves without foreign interference. We can either have the Queen as the constitutional head of a sovereign country, or we can have a president of the European Union. But, by definition – and despite John Major’s claim after Maastricht that the Queen was henceforth a citizen of Europe – we cannot have both.

56 thoughts on “The Tricks They Play”