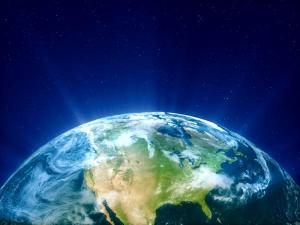 I’m sure you may have read the IPCC’s latest "the world is going to end" prognostications. It appears that "Global warming may have “abrupt and irreversible” consequences and could cause the extinction of almost a third of all plant and animal species on the planet. The UN panel of 2,500 scientists is issuing its warning as governments prepare for a crucial climate summit in Bali next month. (Mmmm, nice location for the jamboree, but not exactly emission free, eh?)

Listen, the UN is a political body stacked with tyrannies. The IPCC is a politically appointed body, so let’s drop the pretense that it is somehow "neutral" on the topic of global warming. It’s not – it has an agenda and it pursues it ruthlessly, if lucratively.

As far as I can see, the real objective of this report is to assist Government’s in hiking taxation and on in controlling what we do. The REALTHREAT from this environmentalism is to our freedom. The IPCC is such a shoddy third rate political instrument that only the biased MSM give it any credence.

Just for starters, read this from Dr. Madhav L. Khandekar retired Environment Canada scientist and an expert IPCC reviewer in 2007…

"As one of the invited expert reviewers for the 2007 IPCC documents, I have pointed out the flawed review process used by the IPCC scientists in one of my letters (The Hill Times, May 28, 2007). I have also pointed out in my letter that an increasing number of scientists are now questioning the hypothesis of GHG-induced warming of the earth’s surface and suggesting a stronger impact of solar variability and large-scale atmospheric circulation patterns on the observed temperature increase than previously believed.

I would further politely ask Mr. Boucher to do a simple reality check regarding the earth’s temperature change. Since mid-1998, the earth’s mean temperature as a whole has not increased at all, despite billions of tonnes of human-added CO2 in the earth’s atmosphere. In the Southern Hemisphere, the land-area mean temperature has slowly but surely declined in the last few years. The city of Buenos Aires in Argentina received several centimetres of snowfall in early July, and the last time it snowed in Buenos Aires was in 1918!"

We can rely on the media to parrot the junk science coming from the IPCC, and I am sure our political masters will appreciate the alarmism it invokes. If there is one good excuse for curtailing our liberties, why it is to save the world!