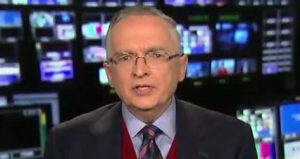 Ralph Peters, a former Army officer, and longtime military and foreign policy commentator for Fox News has resigned. His resignation letter was made privately, but it was leaked.

Peters is a a hawk. He has been a harsh critic of Obama. But that does not make him blind to the shameful conduct of the current president, or to the steady decline of Fox News into a near-RT/Infowars type propaganda mill.

In a lengthy email to his colleagues first obtained by BuzzFeed, the foreign-policy hawk argued that the cable news network had been transformed from a “legitimate and much-needed outlet for conservative voices” into a “propaganda machine for a destructive and ethically ruinous administration.”

“Four decades ago, I took an oath as a newly commissioned officer. I swore to ‘support and defend the Constitution,’ and that oath did not expire when I took off my uniform,” Peters wrote. “Today, I feel that Fox News is assaulting our constitutional order and the rule of law, while fostering corrosive and unjustified paranoia among viewers.”

Peters, a former Russia analyst, warned that the network’s hosts are advancing Russian President Vladimir Putin’s agenda “by making light of Russian penetration of our elections and the Trump campaign.”

The Trump Cult won’t be concerned about Peters’ statement. But thinking conservatives have long had a problem with Fox News, and the likes of Hannity, and of the current occupant of the White House, a corrupt channel and a corrupt scatterbrain of a president in a paranoid devil’s marriage that will be the subject of many books.