With each passing day, the UK draw closer to LEAVING the EU. And the Remain fanatics out there know it, it unhinges them, and so Project Fear 2.0 gets ramped up. Here are a few stories published in the Remainstream media these past few days… 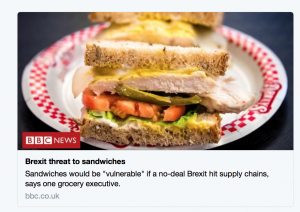 I am expecting the Four Horsemen of the Apocalypse warning any day now !

The state of how we in the UK will Brexit has changed since I last spoke with you. A few weeks ago the UK PM Theresa May released her “Chequers Plan” – essentially Brexit in Name Only. This caused several key resignations from her government and is massively unpopular with the party and rank file. It has also been filleted in Parliament via important amendments made from the Jacob Rees Mogg led ERG group. But BEST OF ALL, it is bein rejected by the EU.

Theresa May’s efforts to bypass Brussels and deal directly with EU nations have been rebuffed as the risk of Britain hurtling towards no deal appeared to intensify. The prime minister was also warned on Friday that the European parliament would veto her Chequers deal unless Ms May comes up with a new plan for the Irish border.

This increases the liklihood of that which I and many others want – a simple WTO terms only orderly Brexit. We leave and we trade with the EU on the same terms as 42 other Nations. And they trade with us on the same terms. Remember, they sell much more to us than we do to them. We don’t hand them a penny of the £39bn May has promised. We just walk away. If the Irish want a hard border give them it.

Theresa May will be gone from Downing Street soon. Her popularity has plummetted and only the summer recess of Parliament has bought her a little time but no hope!