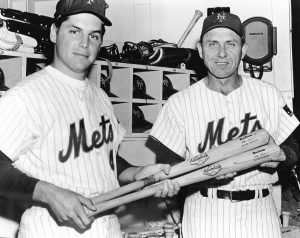 Spring’s here. Just barely, but it’s here. Let the boys of summer to take the field.

Today is Opening Day for most teams. The long 162 game season has begun.

Baseball has a much longer history than other US major sports. The National League was founded in 1876. Some of us have a keen interest in that history. I’ve made pilgrimages to old ballparks long gone, to where Ebbets Field and the Polo Grounds once were. An English hippy in Liverpool actually asked me if there were any remnants of those parks standing, and I was actually able to answer the question.

There was some sad news the other week. Tom Seaver, maybe the best of a post Koufax generation of power pitchers that included Bob Gibson and Steve Carlton, has come down with dementia, a consequence of Lyme disease. He has withdrawn from public life.

Seaver was the ace of the great NY Mets pitching staff that won the World Series in 1969. That team was managed by Gil Hodges, the Brooklyn Dodger first baseman.

Both men were US Marines. Hodges saw combat service in Okinawa, Seaver was a reservist.

Seaver said that before he entered Marines boot camp he lacked any professional discipline. But after the cauldron of USMC boot camp, he was strong and focused. He quickly made the major leagues, where he soon was managed by the no nonsense Marine Gil Hodges. Who taught Seaver and the other Mets how to play the game right, how to play to win.

We lost Gil Hodges a long time ago. Seaver would often get choked up at the mention of Hodges, saying what a great man he was.

We won’t see Seaver in public anymore. Not even at the 50th Anniversary commemoration of the 1969 championship.

But we remember these men who brought their Marine attitude to our ballpark as we enter a new season, which follows on 143 National League seasons that came before it.