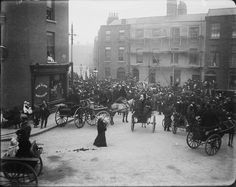 “If the reader has ever been present in a vast metropolis, on the day when some great national idol was carried in funeral pomp to his grave, and chancing to walk near the course through which it passed, has felt powerfully, in the silence and desertion of the streets and in the stagnation of ordinary business, the deep interest which at that moment was possessing the heart of man,—if all at once he should hear the death-like stillness broken up by the sound of wheels rattling away from the scene, and making known that the transitory vision was dissolved, he will be aware that at no moment was his sense of the complete suspension and pause in ordinary human concerns so full and affecting, as at that moment when the suspension ceases, and the goings-on of human life are suddenly resumed.”

Kids are this week returning to schools, not sure what to expect, afterwards to playgrounds as once before, meanwhile gyms are reopening for their parents who’ve been gorging themselves for weeks out of sheer boredom, and on Sunday the various faithfuls will again flock to their various churches as if nothing had happened. You go out to have a look and walk through the city just to see who is going to stand up again after this wave has passed and who will remain lying never to arise again: your favourite café or bookstore,  that old bar that you always wanted to visit but for some reason never did and now perhaps will never have the opportunity to.

Tourists are nowhere to be seen. The industry that normally contributes EUR 782 billion to European GDP and accounts for 22 percent of jobs in the services sector has practically disappeared. Very bad for cities like London and Paris, but for countries like Italy and Greece, already in dire financial straits, it will be a complete disaster. Nobody expects much from the pathetic efforts being made by Croatia and other places to entice travellers back with some kind of Corona-compatible tourism offers.

The finer things of life seem to be all suspended. Haute couture is now on the floor. Givenchy has dropped perfume and switched to disinfectant production, while Louis Vuitton and Balenciaga are churning out protective clothing. Although I’m told the creative people there are very positive (no, not after the virus test) and full of ideas for the future. Some say the Black Death ultimately led to the sensual joy of the Renaissance, and maybe they’re hoping for more of that.

Then there are all those cinemas, opera and concert halls everywhere. The live entertainment industry needs closely packed crowds and conviviality. A sprinkled audience at safe distances from each other in the venue is a certain killer, both for the artist and the audience. But nobody can enjoy a performance in the knowledge that the person next to him could have the virus, as Abba’s Björn said about London’s West End yesterday, so audiences will probably simply stay away, and those awful notions like live concerts online will pretend to take their place.

We will never know the amount of great new talent that will never make it, never have a chance to get their performance across and who simply disappear into other fields because their stage is no longer there.

People can grit their teeth and bear the lockdown and defy Corona, but many will not be able to bear the ugly moment in which “a sigh and a stirring announce the recommencement of suspended life” as after the passing of De Quincey’s funeral cortege.

18 thoughts on “The Awakening”