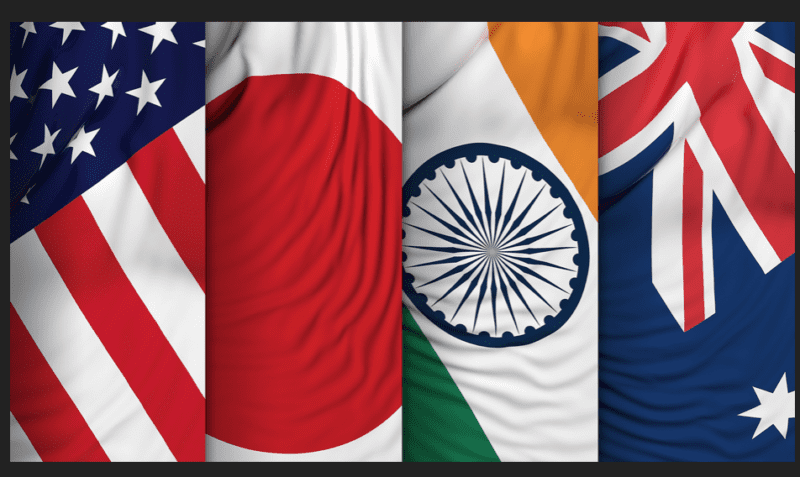 Navies of the four member nations of the Quadrilateral Security Dialogue, or the Quad: India, the United States, Japan, and Australia participated in the 25th edition of the Malabar Exercise, which began off the coast of Guam in the Pacific Ocean on Thursday (August 26) and completed by the end of August 2021.

Malabar, which began as a bilateral exercise, is now one of the cornerstones of military interoperability of the Quad Forces, and the Chief of Defence Staff (CDS) General Bipin Rawat said on Wednesday that the Quad’s Charter is to ensure freedom of navigation for all nations in the Indo Pacific region.

The 24th edition of the Malabar exercise was concluded in November 2020 (in Phase – I and Phase – II) with a notable comeback of Australia after more than a decade. Malabar is a multilateral war – gaming naval exercise that was started in the year 1992. It began as a bilateral exercise between the navies of India and the United States. The invite to join the exercise was readily accepted by Australia and was observed as a “collective strong resolve” by four major Indo – Pacific naval powers, strong economies and vibrant democracies and also all QUAD members i.e. United States, India, Australia and Japan, to support an open, free and prosperous Indo – Pacific region, without any fear and peaceful ‘Right of Way’ nor any ‘Tribute Payment’.

On December 9th 2020, Russia’s Foreign Minister Sergey Lavrov criticised the Quad mentioning it as a devious policy by the Western powers to engage India, in anti-China war rhetoric. Moscow also condemned the United States Indo-Pacific policy and has termed the Quad as a ‘divisive and exclusivist concept’. Lavrov also accused the Western world of undermining Russia’s privileged relations with India too.

Ministry of External Affairs then spokesperson Anurag Srivastav, IFS responding to India’s all – weather friend and ally Russia, mentioned that India doesn’t see Indo – Pacific as a ‘strategy’ or a ‘club of limited members’ and also reminded that India – Russia ties stand independent of any 3rd party interference.

China also lashes on a regular basis at the Quad, mentioning it as a China – containment policy. The Chinese State Counsellor and Foreign Minister Wang Yi, stated that the US wanted to use this grouping as the basis to build an ‘Indo – Pacific NATO‛.

India, on several occasions, has reiterated its adherence to a ‘Free and Open Indo Pacific’, (FOIP) region and its engagement within the region being strictly based on its own national interest. On December 11, 2020, while delivering a Keynote address at the Global Dialogue Security Summit, CDS General Bipin Rawat specified a need for change in approach to security from unilateral to multilateral mode which mandates increasing training engagement, experimentation and sharing war skill sets with partner nations in order to fortify the future of the region and developing new war protocols for the world at large.

Russia’s recent statement lies in tandem with Chinese skepticism towards India’s participation in the Quad and the Malabar Exercise. Lavrov’s remarks can also be seen as a testimony of increasing Chinese influence on Russia’s Foreign Policy, and it’s deepening economic ties with China. Russia has laid pipelines of more than 2200 km long and supplies gas and crude to China’s, ever increasing energy needs away from the Indian Ocean conflict zone.

Ideological tension between the two countries emerged after Stalin’s death in the year 1953. Nikita Khrushchev denounced Stalin’s crimes in 1956, and both regimes started to criticise each other. At first, the criticism was indirect and muted, but in the year 1961, Mao accused the Soviet leadership of revisionism, and the alliance openly finished. Both countries competed for control over foreign communist states and political movements and expanded their area of influence and leading to the ‘Warsaw Pact’ countries, and many countries had two rival communist parties in their own nations, that concentrated their fire on each other. This had affect in India too, based on Russian and Chinese ideology of communism.

In 1969, a brief border skirmish between the two countries erupted. Khrushchev had been replaced by Leonid Brezhnev in the year 1964, who abandoned many Soviet reforms criticised by Mao. However, China’s anti – Soviet rhetoric intensified under the influence of Mao’s closest supporters, the Gang of Four. Mao died in the year 1976, and the Gang of Four lost power in the year 1978.

The Sino-Soviet border conflict was a seven-month undeclared military conflict between the Soviet Union and China in the year 1969, following the Sino-Soviet split. After a brief period of instability, Deng Xiaoping became the new leader of the Mainland China. The philosophical difference between both countries lessened somewhat since China’s new leadership abandoned anti – revisionism.

Dispute was resolved in a series of border agreements that Russia and China concluded in the year 1991, 1994 and 2004, as a result of which China received several hundred islands on the Argun, Amur, and Ussuri rivers, including Damansky (Zhenbao), Tarabarov (Yinlong) and approximately 50% of Bolshoy Ussuriysky Island (Heixiazi Island) near Khabarovsk.

China’s internal reforms did not bring an immediate end to conflict with the then Soviet Union. In the year 1979, China invaded Vietnam, which was a very close Soviet ally. China also sent aid to the Mujahedin against the Soviet invasion of Afghanistan. In 1982, Brezhnev made a conciliatory speech offering reconciliation with China, and Deng agreed to restore diplomatic relations. Now the Red army do not keep a close vigil on the border.

In the year 1985, Mikhail Gorbachev became President of the Soviet Union, reduced the Soviet garrisons at the Sino – Soviet border and in Mongolia, resumed trade, and dropped the border issue that had caused open war 16 years earlier. In the year 1989, he withdrew Soviet support from the communist Government of Afghanistan and returned back badly bruised and beaten. Few analysts say that Russia sent it forces on the basis of an invite sent by the communist regime of the day in Afghanistan.

Rapprochement accelerated after the Soviet Union fell and was replaced by the Russian Federation in the year 1991. Sino – Russian relations since 1991 are currently close and cordial. Both countries maintain a strong geopolitical and regional alliance and significant levels of trade.

Bilateral trade between Russia and China increased 3.4% in the year 2019, amounting to US$ 110.79 Billion, according to the Chinese Administration of Customs. Russia is seen as a friendly trade partner by China and the two countries share a long history and border. Russia has a negative trade balance with China: in 2016 exports amounted to US$ 28 Billion, imports US$ 38.1 billion (in 2015, respectively US$ 28.6 and US$ 35.9 Billion). The share of China in foreign trade of Russia grew from 12.1% in 2015 to 14.1% in 2016. Since 2010 China is the largest trading partner of Russia.

The two countries have also signed a US$ 400 Billion deal over 30 year timeframe to supply gas to China along the 1,800 miles long pipeline known as the Power of Siberia. Russia’s Central Bank has increased its Chinese currency reserves from less than one percent to over thirteen percent, thereby reposing greater faith in the Chinese Renbiki. China has also surpassed Germany as the principal supplier of industrial plant and technology.

Russian deputy envoy to India Roman Babushkin said, ‘Moscow would like to avoid lack of trust between our independent partners India and China. Escalation between the two needs to be avoided for peace between the neighbours. The state of affairs here is a matter of regional stability while escalation can be misused by the outside powers in the geopolitical purposes to create further alienation lines in the region. Rumour mills informed that Russia tried twice to cool the tempers on the border but India remained firm and clear headed. This has called the Chinese bluff, but yes regional platforms such as SCO and RIC help expand common ground and serve purposes of regional stability.

Despite the risk of financial sanctions from the US, India has continued with its expansive defence relationship with Russia, which includes the signing of mega arms deals. On October 5th 2020, India had signed the US$ 5.43 Billion (over Rs 39,000 crore) deal for five squadrons of the Russian S-400 Triumf air defence missile systems, like the Dome Shield developed by Israel. The US has already imposed sanctions on Turkey, and she is a NATO ally and China for acquiring the same S – 400 systems under its new law called CAATSA (Countering America’s Adversaries through Sanctions Act), which seeks to prevent countries from buying Russian weapons or the Iranian oil. On the other hand, India has also signed a number lucrative defence contracts with the US as well.

It is important to see how India balances itself within the two emerging power blocks with its bilateral and multilateral engagement with the US, Russia and China. The vibrant Russian press always criticises Indian commitment to QUAD. A major news portal writes, “The weak link in the Quad group is India, which has been tilting against China under Prime Minister Narendra Modi, but is not a legal ally of the US as the others are. It is also geographically connected to China, the poorest country in the group (by GDP per capita, PPP) and a fellow member of a number of international institutions alongside China, including the Shanghai Cooperation Organisation (SCO), BRICS (Brazil, Russia, India, China, South Africa) and the Asian Infrastructure and Investment Bank (AIIB), without realising that India is approaching US$ 3.00 trillion economy.

Yet, despite this tilt, India is non-aligned and is leaning towards the West to uphold its strategic independence in the face of the growing power asymmetry between it (India) and China. That said, given its near-equal population size and potential for economic growth, it actually has the capability in the long term to cause problems for its neighbour. Thus, while its attempts at deterring Australia may not have yielded results, China has exploited opportunities to try to counter New Delhi, while keeping diplomatic relations cordial.

A strategic partnership with Russia based on the absence of fundamental conflicts of interest and a shared belief that some form of multipolarity is better than any sort of Sino – US condominium and is important for India. India and Russia have been members of various international bodies such as the UN and one of the P10 nations of UNSC, chair of the UNSC in August 2021, BRICS, RIC, G20 and SCO and have supported each other on a wide range of issues from time to time. A robust strategic partnership based on five major components i.e. politics, defence, civil, nuclear energy, anti-terrorism cooperation and space, is bound to continue and will help India compensate for its engagement with US by means of Quad or ‘2+2 Dialogue’.

In years to come Quad combination will grow, and grow much faster whether any political combination likes it or not. Germany has indirectly joined Quad, by posting it naval officers along with Australian ships and officers. French has shown interest in joining the Quad pro-actively and can open many of its strategically located bases for the frigates and armada to berth and refueling facilities. Britain wants to expand and want to regain itself as a maritime power of the past and these talks would have been held, had BoJo come to India to be the Chief Guest of the Republic day parade on the Rajpath.

Russian criticism is a well thought out strategy to put pressure on India to continue procuring more arms from Russia, but India’s Made in India has unnerved the world global arms market and India’s strategic sale of BrahMos missile to few nations and showcasing India’s own ‘Tejas’ has brought respect to the country!