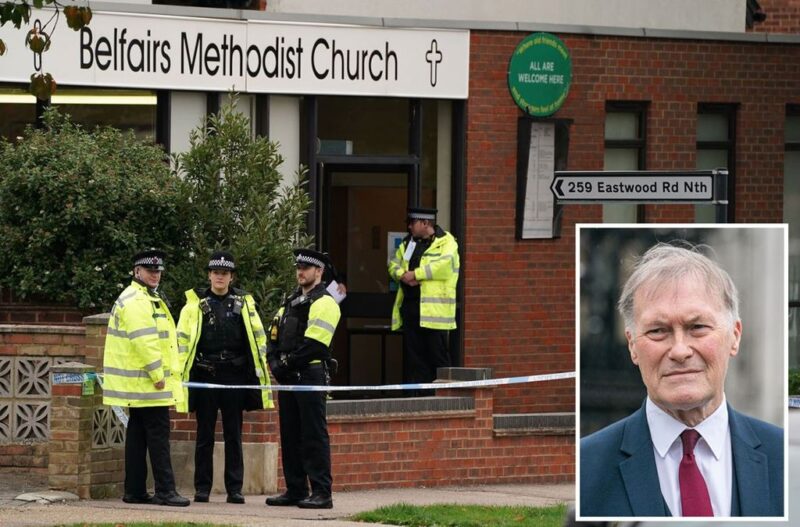 There has been a genuine sadness at the murder of Conservative MP David Amess, by all accounts a decent and well liked man, a devout Christian, brutally stabbed to death in a church in his constituency of Southend-On-Sea. Mr Amess was holding Friday clinic, serving his constituents when Ali Harbi Ali, a muslim previously on the Prevent program, is reported to have stabbed him 17 times in a frenzied attack.

not that Sky News seem to want you to know he is a muslim. Sky News bizarrely seem to hope you infer he is a Christian with this article headline, which itself focusses on his time at a ‘Christian School’.

The national debate following this horrific incident is dramatically different to the media driven coverage following the murder of Jo Cox a little over five years ago. Then, the focus was on the killer, mentally ill Thomas Mair, a loner who had warped world views and all attention was on his ideology. Who influenced him, which groups was he in, what connections did he have? Politicians again and again referenced his ‘far right’ views and demanded action against anyone and anything politically right of centre. When Darren Osborne drove into people outside Finsbury Park Mosque, much was made of the fact that he was on the mailing list of ‘Rebel News’, a Canadian News outlet for which Tommy Robinson was working at the time. Indeed, at his trial, Independent journalist Lizzie Deardon tweeted ambiguously that Osborne had received ‘direct messages’ from Tommy Robinson, causing a media frenzy. The reality was, those two ‘direct messages’ were simply mass mailings from Rebel, there was no connection between the pair. Deardon, who has written on Tommy Robinson over 200 times without speaking to him clarified her tweet later as the storm grew, but the shockwave had happened.

So compare and contrast the amplification of the ideology of Jo Cox’s killer and the forensic scrutiny of every aspect of what he may have stood for (and how all influences could be banned), with the complete lack of interest in the motivations of Harbi Ali. Similarly the ‘bow and arrow’ jihadi in Norway who killed a few days earlier in Norway – why is nobody asking why a convert to Islam believes killing non-muslims is suddenly religiously acceptable?

Now all the attention is on ‘online hate’ and anonymity online, or security for politicians as though these methods may deter the next of the 40,000+ potential jihadis on the terror watch list from striking. Worryingly, Harbi Ali wouldn’t be on that list, so the true number is of course unknown.

So if words on social media can have consequences, attention needs to be turned to groups and organisations that may influence these jihadis. Harbi Ali’s profile on social media contained the words ‘death to Israel’, and he would no doubt find no end of material to reinforce his bigotry and hate.

Since the installation of Jeremy Corbyn as leader of the Labour Party, antisemitism has almost become mainstream. Shockingly, Harbi Ali’s profile would not have raised any flags or alarm bells, such is the commonality of such sentiment in Europe in 2021. The Labour Party itself was found guilty of systematic racism by the EHRC, but has not suffered any repercussions from social media in terms of bans or deplatforming. The most abusive and toxic language from politicians in recent years has almost exclusively been from the ‘nasty party’, ie Labour, as we recently saw with Angela Rayner’s ‘scum’ rant.

But antisemitism stems from elsewhere too. The Koran is well documented as having much antisemitic content, and the large increase in Europe of muslim immigration has coincided with the increase in antisemitism. Mein Kampf remains a bestseller in the Arab world, and is often sold next to religiou doctrines in bookshops. We have seen unprovoked attacks on Jews on the streets of London from muslims, even groups travelling from Blackburn to shout rape threats to Jews via a loudspeaker.

So in this climate, one would hope to see leadership from organisations such as the Muslim Council of Britain, an organisation that presumably muslims look to, to try and reduce the heat and reduce this problem in the community that they claim to represent. But what we see from spokesman Miqdaad Versi on his twitter account is in fact a trend of relatively frequent anti Israel messaging – and no “pro Israel” messaging for balance. To bigots and racists who already demonise Israel and Jews, this may well validate their prejudice. If leadership organisations are continually vocalising the supposed crimes of Israel, what does this do to the mind of the potential jihadi? David Amess was a known Israel supporter, we do not yet know if that played a part in his murder, but the profile of Harbi Ali shows a deep hatred of Israel with his call for it’s destruction, so it is vital that muslim organisations focus their efforts of driving out antisemitism. There is an inarguable issue, just as there is with mass grooming and terror attacks – 74% of terror related prisoners in the UK are muslim, a shocking per capita statistic for 5% of the population. If that number becomes 10% or 15% the ability to control the issue is too big, so it is vital it is addressed now. The MCB should play their part.

Sadiq Khan, at time of writing has yet to condemn the TFL bus stop poster in London that claims if you do not boycott Israel you are ‘abnormal’. Dehumanising Jews by implying they are abnormal is not acceptable, but the speed he has responded on other matters causes concern that this has not yet warranted a strong response.

We will be writing to the Home Secretary about the example being set by certain groups, including some far left organisations who exist to whip up hate and anger against individuals that they deem as political enemies. Banning anonymous accounts is not the answer to preventing further jihad attacks – facing and dealing with the issues primary is.

If you appreciated this article and would like to support us, would you consider a one off small donation?
(any currency can be selected)
Choose Amount