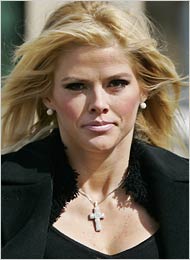 The press has been full of the death of Anna Nicole Smith.

Her claim to fame of course was that in 1994, when she was a mere 26, she married an 89-year-old billionaire, J Howard Marshall. Naturally it was love at first sight – of his wallet. I’m sure he got what he wanted from the deal as well – she was a very attractive looking young woman back then.

I think her story is a tragic one – she pursued wealth, found it; she wanted fame, got it in buckets; and she ends up being found dying, on her own, in a Florida hotel. Apparently she modelled herself on Marilyn Monroe – now she shares the same fate. I feel sorry for her family – the media may have lost a "reality TV" star that they could label "trailer trash" but her FAMILY have lost a daughter, a sister, a mother. Fame does not ensure happiness.  I think that India Knight’s article here on Anna is well worth a read – I think it is VERY wrong the way the media treated her. Rest in peace.

11 thoughts on “TRAILER TRASH OR A CANDLE IN THE WIND?”