So Chelsea Clinton is getting married this weekend. How does the rhyme go? Oh yes: 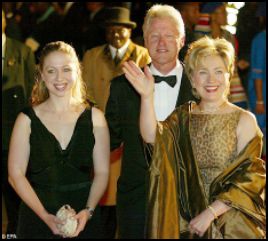 Something old, something new, something borrowed, something blue, plus a no-fly zone, sniffer dogs, the secret service all over town and more overtime than the police ever dreamed of.

ABC News estimates the total cost for the affair could reach $2 million, and other reports say that it could cost as much as $5 million. The flowers alone could cost $250,000.

Goodness, Bill is stuck with a bill, eh? How will a poor boy who grew up to become a humble public servant pay for it all? Give it a Greek theme? Oh that’s right, he’s staggeringly rich. Since the American people didn’t choose to shower him with cash we can wonder at the services rendered and for whom.

Anyway, it’s just as well the security’s as tight as a new boot. An awful lot of celebs and Tremendously Important People will be in town for the gig. I hope Americans remember it’s their patriotic duty to fork out the $millions instead of balking at paying for protection for some of the planet’s richest people. Well it is, isn’t it? They should sit back in gratitude, enjoy the show and have a weekend off from worrying about where the next paycheck’s coming from.

22 thoughts on “A BRIDE WITH EVERY REASON TO BLUSH”