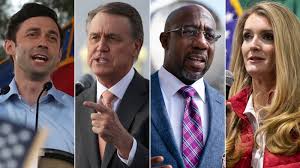 Tomorrow is Election Day in the Georgia Senate runoff. It’s a big deal.

In years past, Republicans just had to show up in order to collect their victory. Suddenly, that’s not true anymore. The Dems are seriously organized. The organizers have registered plenty of new voters. Their voters will show up. Many have already, as early voters.

Mitch McConnell and Donald Trump are unintentionally doing all they can to help the Democrats. McConnell has blocked the larger stimulus checks that lots of Georgians need. Trump has cast doubt on the election process itself, saying that an honorable ( Republican ) official, Mr. Raffensberger, knows about mass fraud and is doing nothing about it. It’s a lie, but lots of rubes believe it.

If you were a working class Republican voter who could use an aid check, and who has been convinced by the likes of Trump and Lin Wood that the election process, one overseen by Republicans, is fraudulent, why would you bother to vote? Lin Wood has publicly asked Republicans not to vote!

I don’t like any of the four candidates, for different reasons. It’s a pity all four can’t lose.

If I lived there, I’d vote, but I’d hold my nose when doing so.

This race is no sure thing. But if the Democrats win tomorrow, there will be two reasons. One is that the Dems worked their ass off to seize it. The second is that the leader of the Republican Party has committed political malpractice on a grand scale, by casting doubt on a process that his people needed to enthusiastically participate in.

May the least bad candidates win.

169 thoughts on “A Confederacy of Dunces”