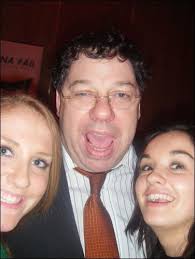 Wonder will Jay Leno be at the Saint Patrick’s celebrations in Gotham next March?

The Tonight Show host made the comments after he showed his Tonight Show audience a photograph of Cowen. He told the crowd that the man in the picture was not a bartender, but “the Prime Minister of Ireland” to uproarious applause. Leno showed the dishevelled-looking Mr Cowen, asking the question: “Looking at that guy. How many think he is a bartender?”