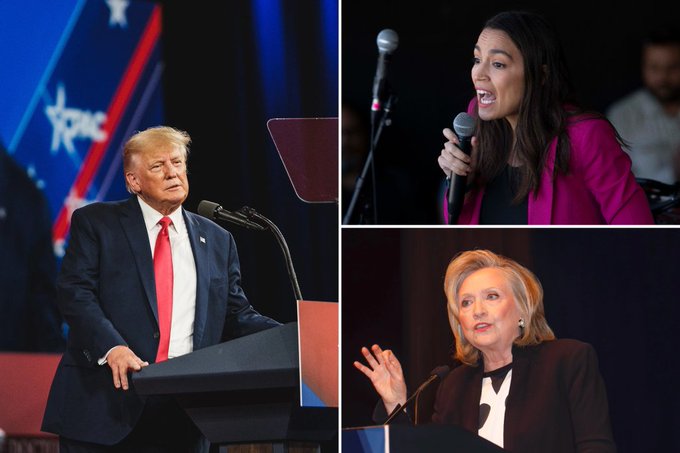 I like Miranda Devine, she writes for the NY Post. Her perspective definitely hangs on the right which she unlike so many of her peers doesn’t deny or hide claiming a false neutrality. Her journalism is always well researched, thought out and presented in an understandable manner.

So yes I do agree with many of the positions and points that she put’s forward. Her current column however misses the Donkey in the room.

Ms. Devine believes that the ticket for 2024 will be Trump vs either AOC or the HildaBeast. She dismisses Kamala Harris.

After an expected midterm shellacking, Biden will be pressed to announce he is not seeking a second term at age 81.

And, as preposterous as it sounds, Alexandria Ocasio-Cortez vs. Hillary Clinton is the matchup to watch, according to former Democratic strategist Dick Morris.

While Kamala Harris ticks two boxes, “female” and “black,” her intractable unpopularity and poor performance as vice president would see her drop out of the primaries before Iowa, as she did in 2016, unless she is a masochist.

Now I have two issues here, the first one is Dick Morris. The man was good at his job, at one time he was the presenter/handler of a very complicated President and did it well. He also is a person of very questionable scruples and varying levels of sanity. He is however tuned into all the behind the scenes communications in the Democrat Party, his opinions can’t be just dismissed whether they sound credible or not.

My main problem with this prediction is just the flatout dismissal of Kamala Harris. Both Devine and Morris right her off as if she is not a factor. Now as a lone candidate she has no more and a lot less to offer the voters as any candidate at that level. The ONLY factor here that matters is Harris will have Obama’s backing.

The Obama’s created an old school “Political Machine” based on the machines of old that ran Chicago, NYC, and Philly. The Obama’s modernized it and took the concept to a true National Scale. If there is a battle for who will Head the Democrat Presidential Ticket if Biden does not run, and of that there is no guarantee that he wont, it will be fought out between the Clinton political Network vs the Obama Political Network.

AOC will get offers from both sides but she can not be sold as a National Candidate herself. It will be a fight between who the Obama’s back and Hillary Clinton. The Obama’s will back Harris, they may even tease Michele to the public as they line up the ducks behind whoever they chose as “their candidate”.

Kamala has been the invisible woman, Madam Vice President has done a wonderful job of just staying out of sight. The less we see her over the next year the better it will be for her. Everything will be blamed on Joe, it will never touch her. Think about it who is going to do the hard hit pieces on her especially if she has the backing of the Obama’s. No one at the NYT’s, Wapo, LaTimes, CNN, MSNBC, will, and anyone that does will be a racist and dismissed.

The fight for the head of the ticket if Biden does not run will be fought out behind the scenes between the Clinton’s and the Obama’s. I hope they both lose, but my money is on the Obama’s solidifying their complete control of the Democrat Party.

Thank you, Miranda, please keep going, keep us informed. You are doing a Hell of a Job, one of the few.