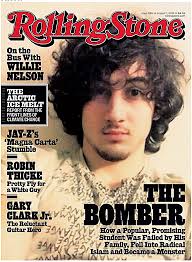 Everybody’s throwing a conniption over the Cover of The Rolling Stone. It shows a sweet angelic looking young man filled with all the promise and possibilities in the world before him.  The picture as alluring as a young Jim Morrison, or Eric Clapton.

The picture is the point of the 18pg story inside. Which attempts to quantify how such a face like that is in reality the face of a monster. Does the story pull it off ? I’ve read about half so far it’s not a bad piece. We’ll see if stays that way till the end, with it’s tone of condemnation and contempt. The jury is still out.

All I know is it got THIS song stuck in my head, and that was OK. I hope it sticks in yours.

One thought on “A non-news event”