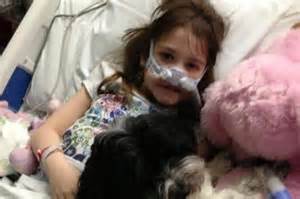 There is a little girl that lives not to far from where I grew up, she’s dying. She has cystic fibrosis. 10-year-old Sarah Murnaghan needs a Lung Transplant.

Federal Regulations state that a child under 12 can’t receive an adult transplant. Which the majority of donors are.  It is more complicated than just a political decision. The reason for the rule is viability and survival rates. There are  1,600 people on the adult waiting list. and 20 children that are also waiting.

This story tugs on my heart in several directions. Her doctors say she would live with an adult transplant, but the Federal board of Doctors say odds are she won’t.

The story is playing like a bad made for TV Movie. Everyone is weighing in pleading for an exception, an exception that isn’t coming. It was a local story and has gone National. So of course the Politicians are weighing in. All of that is to be expected, but this exchange disturbed me.

Health and Human Services Secretary Kathleen Sebelius rebuffed an appeal from Rep. Lou Barletta, R-Pa., on behalf of a girl who needs a lung transplant but can’t get one because of a federal regulation that prevents her from qualifying for a transplant.

“Please, suspend the rules until we look at this policy,” Rep. Lou Barletta, R-Pa., asked Sebelius during a House hearing Tuesday on behalf of Sarah Murnaghan, a 10-year-old girl who needs a lung transplant. She can’t qualify for an adult lung transplant until the age of 12, according to federal regulations, but Sebelius has the authority to waive that rule on her behalf. The pediatric lungs for which she qualifies aren’t available.

“I would suggest, sir, that, again, this is an incredibly agonizing situation where someone lives and someone dies,” Sebelius replied. “The medical evidence and the transplant doctors who are making the rule — and have had the rule in place since 2005 making a delineation between pediatric and adult lungs, because lungs are different than other organs — that it’s based on the survivability [chances].”

Barletta countered that medical professionals think Murneghan could survive an adult lung transplant. During the exchange, he also said that the girl has three to five weeks to live.

Sebelius reminded Barletta that 40 people in Pennsylvania are on the “highest acuity list” for lung transplants.

Now what Sebelius said is true, but there are some things that you just don’t say. In Public, For the Record, and on Film. If you have made the decision that you are not going to intervene, Fine. You don’t then say it publicly.

Also when your a controversial figure that half the country doesn’t trust and says your going to create DEATH PANELS, do you think it wise to have this conversation in public?

28 thoughts on “A tragedy in every direction”