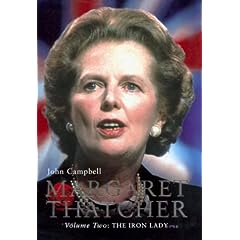 She was so far ahead of her time.

Files released to the National Archives show that soon after becoming prime minister, Lady Thatcher privately complained that too many Asian immigrants were being allowed into Britain. The documents, which are published today under the “30 year rule”, shed further light on Lady Thatcher’s attitudes on race and immigration, political issues that have remained controversial ever since.

“People are really rather afraid that this country might be rather swamped by people with a different culture,” she told World In Action. “If we do not want people to go to extremes we ourselves must talk about this problem and we must show that we are prepared to deal with it,” she added. “We are not in politics to ignore people’s worries. We are in politics to deal with them.”

Amen to that. Lady Thatcher understood that it is vital that the political mainstream connects with and then DEALS with the valid concerns of ordinary people. Of course this was YEARS before Labour came to power and opened the floodgates for immigration thus inducing permanent demographic change on line with their radical multicultural agenda. She was right back in 1979 and is still right. We need to operate strict immigration policies and ensure that those who come in to our Nation offer skills we are lacking and fully assimilate into British culture, laws and traditions.