What is this thing called ‘love’? 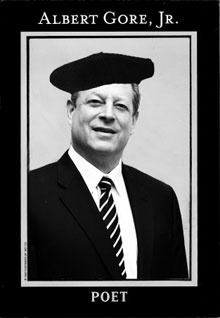 It’s so obvious: Al Gore deserves another award!  This time for poetry!   When I first read Gore’s poem on David’s post below titled “He’s a Poet and You know It,”  I was gobsmacked;  I immediately felt that only a Nobel Prize in Literature, or some prize of equal worth,  could properly honor Al Gore’s original imagery, tear-jerking phraseology… spelling…

But, I joke.  Not so Mark Hertsgaard for Vanity Fair:

“…In his almost 30 years of crusading against global warming, Al Gore has worn a variety of hats. In roughly chronological order these include: congressman, senator, author, vice president, traveling evangelist, filmmaker, investment adviser, and Nobel Peace Prize winner. Now, with the publication of his new book, Our Choice, Gore has unveiled a fresh and most unexpected talent: the book’s opening chapter of concludes with a poem he wrote—21 lines of verse that are equal parts beautiful, evocative, and disturbing…. (my emphasis)

…The result is a surprisingly accomplished, nuanced piece of writing. The images Gore conjures in his (untitled) poem turn a neat trick: they are visually specific and emotionally arresting even as they are scientifically accurate.”

The title to the Vanity Fair article  is Al Gore: The Poet Laureate of Climate Change. Unbelievable.