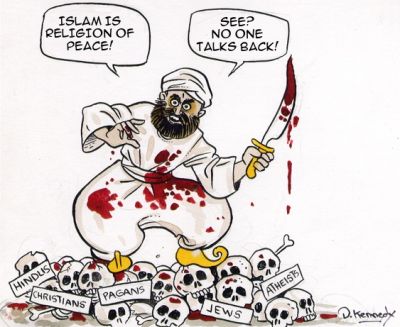 My father and his wife are currently a few days into a 3-week trip to New York City (his fifth visit to the place).  Consequently, both of them could well have been victims – along with hundreds of innocent New Yorkers – of the improvised bomb that, thanks to the watchful eye of Vietnam veteran Lance Horton, was defused before it could detonate.  Reading about terrorist attacks always fills me with anger; reading about terrorist attacks that have the capacity to kill members of my own family fills me with absolute rage!!

Thus, it should come as no surprise that I regard the comments of former Lib Dem MP Alex Carlile with incredulity.  As is to be expected coming from an Establishment figure of the Left, he appears not to give a toss about the right of innocent Britons to live with the maximum protection that can be afforded in today’s uncertain world.  Instead he seems much more concerned with not upsetting the Muslims.  By far the greatest threat to this country (and it would appear America as well) comes from the proponents of Islam.  If that community has to experience a disproportionate number of stop and searches in order to safeguard wider society, then so be it.  The proportion of stop and searches related to Muslims will be far less than the proportion of terror threats that emanate from that religion, believe me.

Why does America, France, Britain, Germany, etc. allow mass immigration from Muslim countries?  Although not a fan of the BNP, I have strong sympathy with their policy of banning such immigration.  For this is how some Muslims repay the kindness, and how others sympathise with that method of repayment.  We invite them to our respective countries; give them houses, jobs, security and the right to construct their hulking, ugly mosques in our cities; afford them the right to live in a way that wouldn’t be possible in their countries of origin; permit them to raise copious amounts of children; and this is how we are rewarded!  Many of those mosques become preaching grounds for jihad and many of those children become active or supportive cultural and ideological subversives in the land they were nurtured in.  Wow what a bargain, guys.

As for Carlile’s observation on that abomination that is the burka, his dhimmitude reaches new grounds.  To claim that wearing this monstrosity makes the person ‘no less British’ defies explanation.  Oh really, Alex!  Yesterday, whilst shopping in Morrisons in Bradford, I was returning my empty trolley to the bay to retrieve my £1 coin when I was approached by a ‘woman’ in a burka.  Instead of the customary ‘here’s pound, love, can I have your trolley?’, she came towards me in absolute silence and thrust a pound coin in my direction with her boney, chicken-clawed hand.  That’s how British the burka is, Alex.  The people who wear it don’t even follow the normal protocols of conversational (let alone facial) interaction we are so used to here.  Despite shutting themselves off from everyone else and seeking to make contact without resorting to words, they then wonder why the likes of me reply with sentiments such as ‘up yours, you veiled a**ehole’.  The burka is not British, American, Australian or European.  It is not even Muslim.  It is a cultural product of the Arabian Peninsula – that very same peninsula its fans should relocate to.

I have a thought that Alex Carlile and the other pro-burka apostles should pay attention to.  Thanks to the CCTV in Times Square, the face of the scumbag who left his cocktail of murderous fuel and explosives has been identified and could well be enhanced.  Just imagine if he had been wearing a burka!!!  His anonymity would have given him precious extra time to slip the grip of US law enforcers.  Robberies have taken place by people wearing burkas.  How long will it be before a terror attack is successfully concluded in the same way?  Will Carlile et al still be calling for its protection under the same twisted interpretation of rules governing civil liberties then?  Unfortunately, the answer is very probably ‘Yes’.

2 thoughts on “Alex In Wonderland”