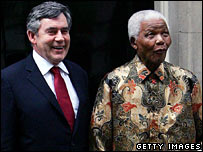 Well, the media and the political left may be dancing in delight that a statue of Nelson Mandela is being unveiled in Parliament Square today but I am singularly unimpressed at this tribute to the Marxist-loving former terrorist Mandela. Naturally Gordon Brown has jumped on the bandwagon, portraying himself as a long standing friend of Mandela. If South Africa wants to erect a statue of Mandela on every corner, fine. But I fail to understand why the United Kingdom goes out of its way to honour this ancient thug. If ever a statue SHOULD go up in Parliament Square, I would nominate Ronald Reagan. Wonder would Gordon Brown be so keen on THAT?

69 thoughts on “AN AFFRONT IN PARLIAMENT SQUARE…”