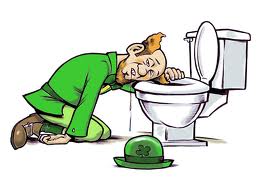 …and everyone in the bars shows their respect.  Get this;

A new Channel 4 comedy series which depicts London’s Irish population as binge-drinking, English-haters suffering from a permanent hangover has been accused of “racism” by members of the community.

Oh no! The sheer HORROR… do read on….

Due to air in September, London Irish is about “a hard-drinking, hard-living ex-pat community of Northern Irish twenty-somethings who live in London”. The synopsis says: “For these four friends it’s not easy navigating their way through London life, particularly when they’re too drunk to know where they’re going, or remember where they’ve been.”  “They have sh*t jobs, no money, and are surrounded by English people. In fact there’s only one thing worse than living in London with the English. And that’s living in Ireland with the Irish.”

Now THAT seems quite balanced to me but not to all, evidently!

“Members of London’s Irish community have already rounded on the show. Pádraic Graham ‏tweeted: “Sounds like something Alan Partridge dreamed up. Are they going to include us planting bombs & Tarmacing driveways too?”

And BEST of all..

Kate Bones wrote: “I’m shocked the writer is Irish. We need to move on from old cliches & stereotypes. This is backwards. Tell a real story!”

Hah – so an IRISH writer is ..erm..racist against the Irish. O’blimey!

79 thoughts on “AN IRISHMAN WALKS INTO A BAR…”