When you wish upon a star!

Birmingham? What could be worse?

It all depends who is talking about what

it all depends on your ‘Point of View’

I listened this morning to the Farming Programme, the premier programme from the BBC for both rural and farming communities in Great Britain. The whole slot was dedicated to a revisit to one farm, and one farming family, whose home and fields were devastated by the torrential downpours of the winter. The Somerset Levels, where this farmer’s family has lived for three generations, has always had flood problems, as was admitted by the farmer himself, but the interview concentrated on the fantastic response by volunteers to the problems of the entire Levels farming and rural community which had literally been washed away by the flood waters. From huge quantities of hay and silage from farmers based hundreds of miles away, hauled and delivered free of any charge whatsoever for the displaced cattle standing in borrowed barns; to the lady who made sandwiches to help feed the volunteers toiling to shore up the leaking sandbag barriers, they all received due praise. 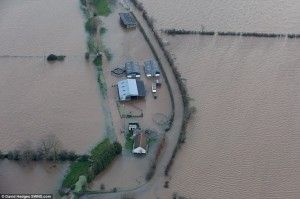 The farmer, first interviewed as he battled to arrange transport for his animals, was philosophical about the struggles ahead as he talked to the BBC about awaiting a mobile home to arrive so his family could once more be together in some semblance of normality, talked about the damage done to his home. with brickwork cracked, floors destroyed and the very stuff which everyone surrounds themselves laid out on the grass, prior to being ‘skipped’.

Mention was made of the amazingly short  time between the ‘normal’ flood water which had lain for a week or more, and the onslaught of nearly five feet of water as the huge amounts of rainfall moved forwards over the surrounding farms and fields. But strangely enough, just a few phrases were uttered about how this devastation had occurred in the first place. An off-hand remark about ‘the politics’ of the Somerset Levels, when the farmer talked about the lack of maintenance of flood prevention measures, dismissed by the BBC interviewer as unimportant, showed, as far as I am concerned, the deep, almost impenetrable brainwashing of BBC staff when it comes to any criticism whatsoever of European or even British government policies, with special emphasis not given to the mad policies and directives of the Environmental Agency, with their earnest desire to save the bloody birds and habitats, and forget about those noisy farmers, who simply could not understand that the flooding was in their own ‘best interests’!

5 thoughts on “…and don’t mention Europe; its all Climate Change: Gottit?”