LOL… What a Maroon

FOAMING AT THE MOUTH

Some seventy years ago, come tomorrow, the second War to end all Wars came to an end, in Europe at least; the Far East portion lasted a little longer until the Japs saw sense with aces represented by two nuclear weapons back to back. The evil genius which had been Hitler was dead, the Russians were in the suburbs of Berlin; the armoured columns of the Americans, the British and the Canadians were racing towards the Elbe. Most of the German Army was trying to go west, in order to surrender to the Americans or the British; anything to get away from the avenging ferocity which was the artillery and tank columns of the Russian Marshal Zhukov. The war was ending, and it was almost as though Wagner’s Gotterdammerung was coming to reality. The promised Thousand Year Reich was slowly being pounded into the rubble which was all Germany’s cities had become; the adoring crowds at the Nazi ceremonies had somehow dissipated, the cheering was silenced long ago; and all that was left was the signing of the Surrender documents . Our Navies had vanquished the submarines which nearly starved us into surrender; our aircraft had swept the skies clear of the formidable Luftwaffe. The death camps were being discovered and liberated. Our forefathers, nearly all now dead, had vanquished the best trained, the most formidable War Machine on the planet, and it was time to celebrate.

I have a painting as a desktop on my computer, which I lifted from an Air Battle catalogue. and I was explaining to one of my grandsons about the brave boys and young men who flew bombing missions against Germany, whilst the fighter flyers of the German Luftwaffe were trying to kill them, and he asked me a very grown-up question; “Grandad, why?” The only answer which I could give to a seven-year-old boy was simple, “You see, the men who told those flyers to fight were really nasty people, and they had to be stopped!” 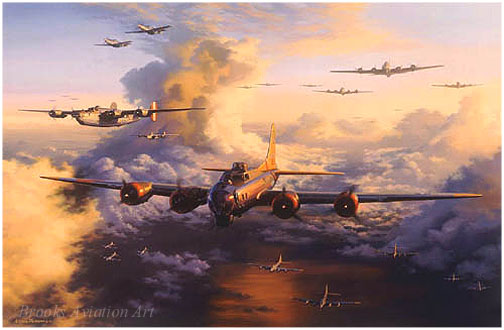 Yes, our peoples sang, and yes, they danced; but the ground upon which the dancing took place was soggy with blood!

As a reality check, just see what the younger generation believes why tomorrow was so very important.

6 thoughts on “and for Germany, General Jodl signs!”