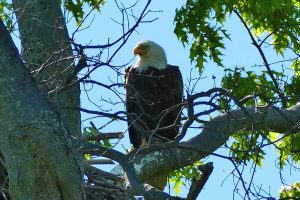 Where was this photo taken? Probably way out west, in say Alaska or Washington state, right?

Nope. It was taken four hours ago, in Staten Island, in the city of New York, by a friend of mine. Click on it and see the detail.

These magnificent birds were once threatened nationally by pollution and the use of the pesticide DDT. They hadn’t been seen locally for over 100 years.

And then slowly, slowly, things got better locally.

The eagles came back. First to visit, then to stay. As of 2017, there were 426 breeding bald eagle pairs in NY State. There are surely more now.

There are also now many hawks and falcons, some of whom live on the towers of our mighty bridges.

And it’s not just the birds. Humpback whales are now seen just offshore in the Atlantic and occasionally in the harbor itself. Whale and dolphins watching cruises now leave from Brooklyn

Things continue to get better, much better.