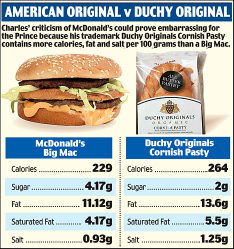 Did you read that "eco-expert" Prince Charles has  launched an attack on the fast-food industry, going as far as to suggestthat McDonald’s should be banned? What rubbish.

For starters, the company’s signature "Big Mac" contains fewer calories, fats and salt than some products in his own organic Duchy Originals food range. His Cornish pasty contains 264 calories per 100g compared to the burger’s 229 calories, and 5.5g of saturated fat as opposed to the Big Mac’s 4.14g.

But it’s about more than that. It’s about CHOICE! People should be allowed to eat what they want. where they want – and IF McDonald’s can attract people with well-priced tasty food, I say good on them. Prince Charles view on fast food is snobbish and removed from reality. There’s nothing wrong with McDonalds food. Maybe we should ban Prince Charles from talking through his backside.