The wonderful arrogance of The President never ceases to amaze and delight. King Barry has decided that since none of the current scandals can touch him due to the blind protection given him by the Press and Government Unions he will just march on with his agenda. Bless his little hate filled heart.

So he will appoint the following two Witches to prominent seats of power.

Susan Rice will go from Ambassador to the U.N. into the job of National Security Adviser. It will also block her from being called before the Oversight Committee. 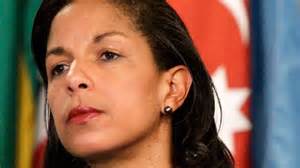 WASHINGTON (AP) – President Barack Obama’s top national security adviser Tom Donilon is resigning and will be replaced by U.S. ambassador to the United Nations Susan Rice, marking a significant shakeup to the White House foreign policy team.  (no it doesn’t)

Rice, a close Obama confidante, came under withering criticism from Republicans as part of the investigations into the deadly attack on a U.S. compound in Benghazi, Libya. Rice, relying on talking points from the intelligence community, said in television interviews that the attacks were likely spontaneous, which was later proven incorrect. (no she is still under investigation and is likely to be subpenaed)
Obama considered nominating Rice as his second-term secretary of state, but she withdrew amid the GOP criticism, saying she didn’t want her confirmation fight to be a distraction for the White House. (in other words he doesn’t want her asked who told her to lie about Benghazi)

Her new post as national security adviser does not require Senate confirmation. (how convenient)

Rice will be a perfect NSA after all she was one of the master minds as NSC Africa specialist, together with the then NSC terrorism specialist Richard A. Clarke, who successfully lobbied for continuing to bar U.S. officials, including the CIA and FBI, from engaging with the Khartoum government. Which might have prevented 9/11 from happening.

Now the Special Princes.. the PERFECT Ambassador to the U.N. Samantha Power. A true hate America first unless Israel is involved, in that case hate Israel THEN the U.S.

Power is a longtime Obama adviser who worked on his 2008 presidential campaign and ran the human rights office in the White House. She left the administration in February but was considered the favorite to replace Rice at the U.N.

Here is an old piece on the wonderful Ms. Powers. This piece highlights why she is perfect for the U.N.

President Barry’s idiotic actions in Libya are a setup to not only further abandon Israel, but set it up to actually be attacked by the U.S.
The philosophy of purely humanitarian strikes using missiles and planes to attack a superior force because civilians are being killed is a philosophy designed to change the American priority that a National interest must be involved, and a disavowment of all Allies. President Barry is implementing Samantha Powers his long term foreign policy advisers beliefs.
Lets look a little at Ms. Powers, she has after all been his advisor since he was a Senator.

A loon from Dublin (wonder if she has relatives in SF/IRA), and graduate from Yale, and Harvard,” a member of the president’s National Security Council who shares Noam Chomsky’s foreign-policy goals. An influential presidential adviser whom 1960s revolutionary Tom Hayden treats as a fellow radical.” A White House official who wrote a book aiming to turn an anti-American, anti-Israel, Marxist-inspired, world-government-loving United Nations bureaucrat into a popular hero, Chasing the Flame . Samantha Power, senior director of multilateral affairs for the National Security Council and is the principal architect of our current intervention in Libya, is all of these things.
A woman determined to subordinate America’s national sovereignty to an international order largely controlled by leftist bureaucrats. According to her own writings. Both Obama and Power are skilled at hiding their ultimate ideological goals out of sight, behind a screen of practical problem-solving. Obama and Power are attempting to accustom us to a whole new way of thinking about war, and about America’s place in the world.
Obama likes following this woman’s advice as shown by his first two apology tours of Europe, In a 2003 piece for the New York Times, ” Power bemoaned the reluctance of American policymakers to apologize to other countries for our supposed past mistakes.” A 2007 piece by Power in The New York Times Book Review attacked the phrase “War on Terror,” which of course the Obama administration has since dropped. Her writings, Obama’s actions, combined with their long working relationship. Gives weight to how much he uses her advice. The only person advising Obama longer than this loon is Rev Wright, and Bill Ayers.

In Power’s view, to be credible, humanitarian interventions must respond to immediate danger (thus Obama’s waiting until the militarily unpropitious moment when Benghazi itself was under imminent threat), must be supported by multilateral bodies (thus the resort to the U.N., NATO, and the Arab League in preference to the U.S. Congress), “must forswear up front . . . commercial or strategic interests in the region” (thus the disavowal of regime change as a goal of our multilateral action), and must “commit to remaining for a finite period” (as Obama has pledged to do in Libya). Even NATO’s threat to bomb the rebels if they kill civilians (which struck many as unrealistic, and at cross-purposes with our supposed military goals) is foreshadowed in Power’s writings, which highlight the need to police both sides in any humanitarian action.
The novel doctrine of “responsibility to protect,” which Power means the Libyan action to enshrine in international law, could someday be used to justify military intervention to impose a “two-state solution” on Israel this is one of Power’s longstanding goals.

The so-called international community has justified military intervention in Libya on humanitarian grounds: Col. Qaddafi was threatening mass murder in Benghazi. But for years, Iran has been threatening mass murder in every city, town, and village of Israel. So, too, has Hamas, Iran’s client, which rules Gaza and has fired thousands of rockets and mortars into Israel. Fatah, which rules the West Bank, incites terrorism against Israelis while its al-Aqsa Martyrs Brigades kill Israelis whenever they get the chance. Where is the international community there?
Libya is actually designed to free the Obamanations hands to use Military force against Israel if it defends itself. After all the Palli terrorists always launch their missiles from schools and hospitals. Their command and control sites are purposly located in buildings with a ton of civilians. Any retaliation by Israel always kills civilians because that is what the terrorists want.
With the establishment of Ms. Powers or if you prefer you can call her Mrs. Sunstein she is married to Cass Sunstein, anyway with the establishment of the precedent of destroying military hardware, of any side that fires into areas where civilians are, under orders from the U.N. sets Israel up for an attack by U.S. forces. It also frees the President to do it on his own without involving Congress. Now with Obama’s demonstrated disdain for Israel, do you think they might need to worry?

The Words in Red are words and thoughts shared not just be me but other commentator’s on this topic,
So if you find a line or phrase I use written by someone else, give yourself a star for doing your research because there are 1 or 2 in there, also it might occur to you.  There are others that believe and think as I do. Doesn’t that make you feel all warm and fuzzy.