Well then, didn’t this ad raise quite the storm in a Tea cup? 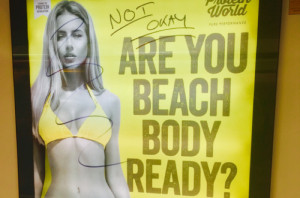 Here’s a tip for political activists: if your rabble-rousing echoes the behaviour and ideas of Islamists, then you’re doing something wrong. Consider the Protein World advert which — clutch my pearls! — features a photo of a beautiful, svelte woman in a bikini next to the question: ‘Are you beach body ready?’ Angry women, and probably some men, have been writing outraged slogans on these posters, scribbling on the poor model’s face and body, seemingly blissfully unaware that they’re following in the footsteps of intolerant Islamic agitators.

“Feminism, sadly, becomes more like Islamism every day. Alongside the ad-defacing antics, there’s also the campaign to put saucy tabloids and lads’ mags in black bags, echoing an ugly sight I beheld in Dubai once: Western magazines whose covers had been defaced with black gaffer tape by religious censors determined to hide women’s cleavage from the masses. And there was the war against Page 3 (RIP): a boob-hiding project that Muslim Patrol would be proud of. Too much modern feminism depicts women as fragile, as unable to cope with rude pictures or rough words, as requiring protection from the banter and imagery of everyday life. In the words of the anti-Page 3 campaign, such stuff can have a ‘negative impact’ on women’s ‘self-esteem’. It’s so alarmingly patronising, and it really does bring to mind the cloying over-protectionism of Islamists, who likewise see women as dainty, easily damaged, in need of constant chaperoning when they venture into the jungle of public life.

Can’t we try to resuscitate the spirit of the old sexually liberated feminism, when the likes of Germaine Greer didn’t want to ban photos of bikinis but instead posed for them?”

Sadly not. Modern feminism is a soul mate to Islamism. It is vocal, quick to take anger, and keen to shut up any real debate.