The Dow hit all-time highs today while house prices are roaring ahead, and all it took was this much newly printed money to achieve it: 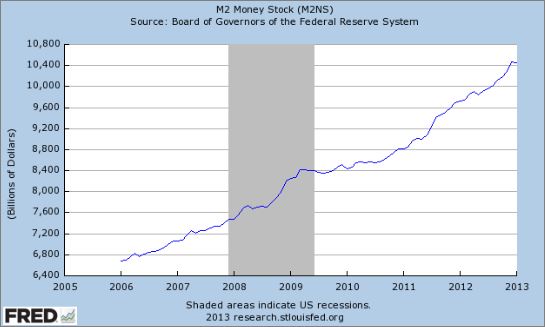 That’s all there is to it. There are no market fundamentals in play. All that new money had to go somewhere, and this time it’s the NYSE and housing. Behind it is the greater fool theory, the belief that you’ll be able to flip what you’ve bought at a higher price. There’ll be plenty of greater fools when Ben Bernanke stops the money presses. As well as housing and stocks, fuel and food are racing ahead too. At some point there will be price inflation generally, everywhere, and the only way back from that is for Bernanke to stop printing. That’s when the bubbles pop and the greater fools are revealed. The only certainty is that when it happens some will say that “free markets have failed”.