Those whom the gods wish to destroy…..

Congress shall make no law

With such brooding rain filled black skies hanging over London what else can you do but blog?! Here are two interesting positions regards Britains oldest laws – Blasphemy and Libel .

Via the Guardian and hattip PoorBastardMarvin

The documentary maker cleared by regulators of misleadingly editing a Channel 4 programme about extreme Islamic preachers is considering legal action. David Henshaw, the managing director of Hardcash Productions which made the Dispatches film Undercover Mosque, said he was still "very, very angry".

"I really don’t like the libel courts and believe in a world of free comment. I don’t mind abuse, but Hardcash’s reputation has been severely damaged and it was a good reputation," Henshaw said. "The Ofcom judgment is great and if anyone bothers to read it they’ll realise this was a bloody good programme. But damage was done that day in August, huge damage.The Guardian

And via MediaWatchWatch on the ongoing Jerry Springer the Opera trial:

The latest on today’s Springer trial comes from This is London.

The human rights group Liberty are intervening in Stephen Green’s private prosecution as an interested third party. Their aim is to kill off the blasphemy law in the UK. Anna Fairclough, their legal officer, said:

"These blasphemy laws should be shelved in dusty archives, not used as a tool to bring mischievous prosecutions against the Arts. Thirty years have passed since the last blasphemy prosecution, making the law ripe for repeal". 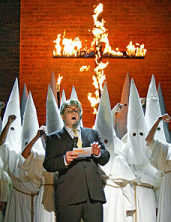 Green is hugely disappointed: "It is a great shame that Liberty have gone down this road, and strayed away from their core activities of defending civil liberties, which we as an organisation support".

Simon Barrow of the secularist Christian think tank Ekklesia has just issued a press release in support of Liberty.

Human rights advocates, including people of faith,have quite rightly campaigned against blasphemylaws in Pakistan and other countries, and having oneon the statute in the UK is both an offence and ananachronism. Privileging one religion above other views is indefensible in a democracy, and for Christians there is the added irony that Christ was himself arraigned on a charge of blasphemy. Using the law to attack opinions about belief is to misuse it, and suggesting that God needs protection against free speech makes no theological sense at all.

83 thoughts on “Blasphemy and Libel”