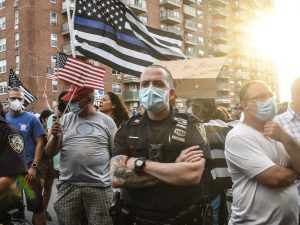 I don’t understand the concept of the counter-demonstration. . Those who want to counter any demonstration that they don’t totally agree with.

BLM has held about a billion demonstrations across America, and AFAIK very few of those demos have been seen counter protests.

Yesterday, there was a demonstration in Bay Ridge by Back the Blue , a march in support of the huge majority of police who are good. Bay Ridge is a natural site for such a demonstration. We’re historically conservative by brain dead NYC lib standards. A number of active duty and retired cops and fire live here. They’re our friends.

The BLM thugs, with some who appeared to be Antifa, a group that some thinks does not exist, somehow found their way here, since they couldn’t bear to let Back the Blue be.

They tried to provoke at every step. They marched and biked down local streets, chanting ” NYPD Suck My Dick ” ( oh yes they did. ) They threw vomit at former City Councilman Marty Golden. They abused customers dining outside. At 11pm, they set a waste basket afire. One idiot who threw a helmet got tazed for his trouble, and he didn’t like it that much.

The thing that most locals are talking about is that they actually burned an American flag. It was caught on film, at Fourth Avenue and 65th, by these fine people who supposedly don’t hate America.

We’re not used to such scenes here, but there you are.

And may bad fortune follow BLM for a hundred million eternities. It is one of the more strange and pernicious movements we’ve seen in the past couple of decades.