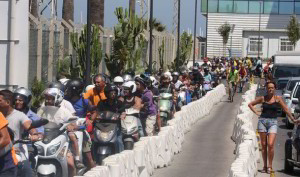 William Hague (yawn) has condemned the Spanish government over claims it is deliberately engineering lengthy delays at the border with Gibraltar. Following a week of shoot-outs and stand-offs in British waters and police “choking” the border, the Foreign Secretary telephoned his Spanish counterpart, Garcia Margallo, to raise “serious concerns”. A spokesman said: “We are aware and very concerned about events at the Spain-Gibraltar border.  “The Foreign Secretary has called the Spanish foreign minister to urge a speedy resolution to the problems at the border.”

With crippling debt, massive unemployment, a bankrupt banking system, Spain has problems. So what better to do than bully Gibraltar?

Gibraltar, of course, is British and for that we must thank the SPANISH who ceded the territory to us as part of the Treaty of Utrecht. But since it IS British, and since this bullying must be stopped, maybe the UK should instantly introduce special border procedures for all Spanish entering the UK. In the name of security..naturally….

30 thoughts on “BLOCKING THE ROCK…”