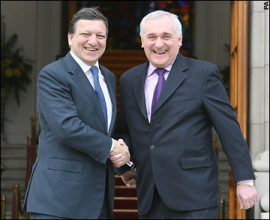 So who would have figured that that the Irish government and the EU would go to enormous lengths to suppress bad news that might encourage a "No" vote  in the forthcoming European Constitution Treaty referendum? Such a result would delight Eurosceptics everywhere, since if Ireland does not ratify the treaty it cannot come into force anywhere in Europe. An internal email from a British diplomat in Dublin let slip that the commission’s vice-president, Margot Wallström, had promised the Irish government to "tone down or delay messages that might be unhelpful".  Then there is the "suggestion" from the French that tax rates might need to be harmonised across Europe – an act that would kill off the Celtic tiger. Get my drift?

It is disgraceful that this collusion takes place and is a threat not just to Irish democracy but ALL our democracies since it shows how treacherous and manipulative the EU and its client State governments actually are. Whilst it is good that the Irish hold a referendum it is clear that the entire apparatus of the EU is focused on engineering a YES vote at any cost.