What a pleasure this evening to see Jonny Wilkinson lift the Heineken Cup, and what a game it was. He, and the Toulon team he captains, lined up against a Clermont Auvergne outfit in Dublin who were favourites because of a stellar backline that had swept all before them this season. Well he and his team won because of the oldest truth of all on any sporting stage: if you dig in, and if you don’t give up, you have a chance. That’s exactly what they did and they won 16-15 in an unbelievably tense finale, at one stage hanging in by their fingernails. 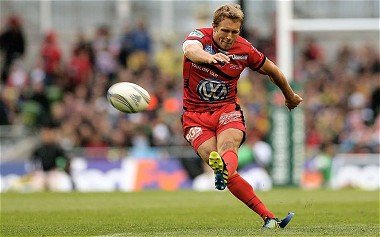 How good was Jonny? In the QF, SF and tonight he didn’t miss a single kick at goal. Added was his characteristic tackling, smashing into Sivivatu to prevent a certain try and getting there, to put off David Skrela from an attempted drop goal, which would have won it at the death for Clermont.

After all those times his white face grimaced in pain and frustration as another injury struck, this is damned well deserved for one of the greats.