This is quite a remarkable image. 25,000 police at NYPD funeral turning back to Bill DeBlasio. 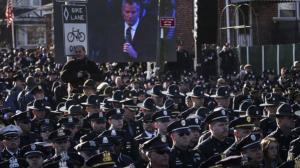