We live in a mad world;

Five prison officers have been suspended as police investigate claims a Woolwich murder suspect was injured while being restrained. Michael Adebolajo reportedly lost teeth in an incident at London’s Belmarsh Prison on Wednesday. The Prison Officers Association denied any wrongdoing by officers saying a prisoner was restrained using approved techniques. The suspect is accused of killing Fusilier Lee Rigby in May.

Here’s an earlier pic of the “suspect” Michael with all his teeth. 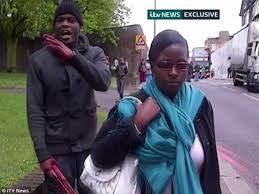 And a bloody knife.

47 thoughts on “DECORATE THEM…NOT SUSPEND THEM”