THERESA MAY: ALL YOUR STREETS BELONG TO ME

THE WAY WE WERE

IN WHICH I ASK FOR BELLIGERENCE 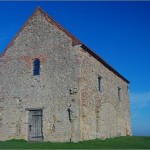 IF you drive east toward the coast through the Dengie Peninsula in Essex, park up in the last village you find, carry on by walking out of the village on a lonely road, continue on when it becomes an ancient track and walk as far as you can go, you’ll eventually arrive at a place, with just one building overlooking the sea, called ‘Othona’. Othona was a 3rd-Century Roman fort, part of the Saxon Shore series of fortresses, built to defend against Saxon raids which were then beginning.

St Cedd arrived at this place by boat in 654 AD, long after the Romans had left, tasked with converting the pagan East Saxons to Christianity, since they were now making themselves comfortable around here. He must have been a persuasive chap because the following year he was appointed Bishop to the East Saxons. He then built a church where he had landed, dedicated to St Peter, on the gatehouse of Othona, using the stones of the fort. That’s it on the left, the oldest church in England, still standing where St Cedd arrived (click the pic).

It’s always open and, apart from a few running repairs, it’s as St Cedd made it nearly 1350 years ago, flecked red with Roman roof tile in the walls. It’s very simple, just a rectangular barn-like structure with no embellishments, a simple alter and wooden benches inside. To me it’s also one of the most beautiful buildings in the land, a great place to put a few miles under your feet when you need to stretch your legs.